THE MOON AND IT’S SURFACE

THE MOON AND IT’S SURFACE

Home » THE MOON AND IT’S SURFACE 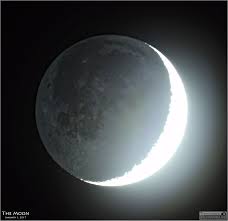 ·      Some of the planets have smaller objects called moons that move around them. The moon is called the satellite of the Planet.

·      The moon is a big ball of rock. A thin layer of dust covers its surface. Moon is smaller than the Earth and it moves around the Earth. No life has been found on moon so far. Although it is nearly 400,000 kilometers away from us and it is our nearest neighbor in space.

The moon is a fascinating object for poets and story-tellers but when astronauts landed on the moon, they found that the moon’s surface is dusty and barren.

·     There are many craters of different sizes.

·     It also has a large number of steep and high mountains. So of these are as high as the highest mountains on the Earth.

·     The surface of the moon has no atmosphere. It has no water.

·     The Moon is very hot during the day but very cold at night.

·     Moon has no light of its own. It shines due to the reflected light of the sun that falls on moon surface.

The earth has one moon. It is smaller in size than the earth. As the moon moves around the earth, it is called the earth’s satellite.