In sudoku, the objective is to fill the grid with digits so that each column, each row, and each of boxes contains all of the digits from 1 to 9.

A few of the numbers are filled in the grid as your clues.

DO you know where did the SUDOKU originate? 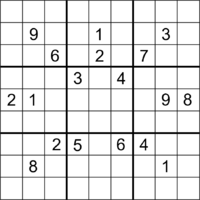 The game first appeared in Japan in 1984 where it was given the name “Sudoku,” which is short for a longer expression in Japanese – “Sūji wa dokushin ni kagiru” – which means, “the digits are limited to one occurrence.”