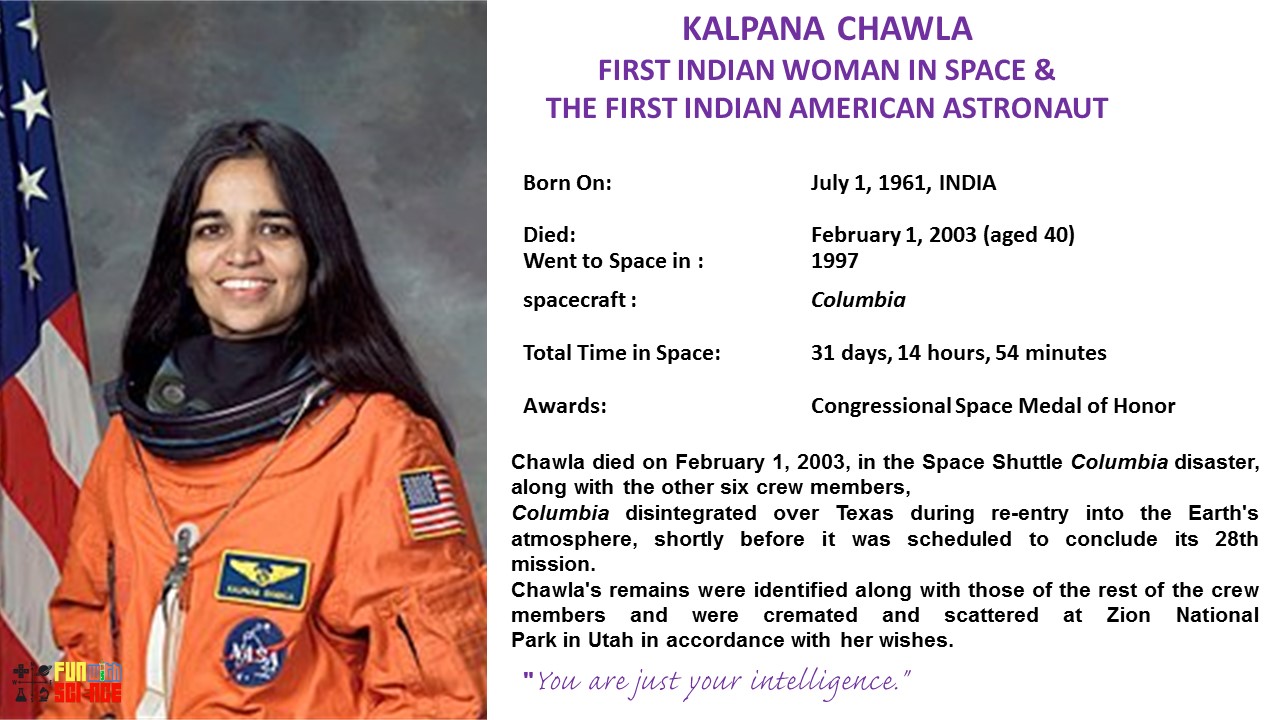 Born in Karnal, India, on July 1, 1961, Chawla was the youngest of four children. The name Kalpana means “idea” or “imagination” and was often went by the nickname K.C.

Kalpana Chawla obtained a degree in aeronautical engineering from Punjab Engineering College before immigrating to the United States and becoming a naturalized citizen in the 1980s. She earned a doctorate in aerospace engineering from the University of Colorado in 1988, having previously obtained her master’s degree from the University of Texas. She began working at NASA’s Ames Research Centre the same year, working on power-lift computational fluid dynamics.

In 1988, she began working at NASA Ames Research Center, where she did computational fluid dynamics (CFD) research on vertical and/or short take-off

In 1994, Chawla was selected as an astronaut candidate. After a year’s training, she became a crew representative for the Astronaut Office EVA/Robotics and Computer Branches, where she worked with Robotic Situational Awareness Displays and tested software for the space shuttles.

Her first space mission began on November 19, 1997, as part of the six-astronaut

crew that flew the Space Shuttle Columbia flight STS-87. The shuttle made 252 orbits of the Earth in just over two weeks. The shuttle carried a number of experiments and observing tools on its trip, including a Spartan satellite, which Chawla deployed from the shuttle.

Chawla was the first Indian woman to fly in space. She spoke the following words while traveling in the weightlessness of space, “You are just your intelligence.”

The satellite, which studied the outer layer of the sun, malfunctioned due to software errors, and two other astronauts from the shuttle had to perform a spacewalk to recapture it.

On the morning of Feb. 1, 2003, the space shuttle returned to Earth, intending to land at Kennedy Space Center.

At the launch, a briefcase-sized piece of insulation had broken off and damaged the thermal protection system of the shuttle’s wing (the shield that protects it from heat during re-entry).

As the shuttle passed through the atmosphere, hot gas streaming into the wing caused it to break up. The unstable craft rolled and within less than a minute killed the whole crew.

The entire crew of seven was killed.

The shuttle broke up over Texas and Louisiana before plunging into the ground.

Chawla’s remains were identified along with those of the rest of the crew members and were cremated and scattered at Zion National Park in Utah in accordance with her wishes.

After her first launch, she said, “When you look at the stars and the galaxy, you feel that you are not just from any particular piece of land, but from the solar system.”