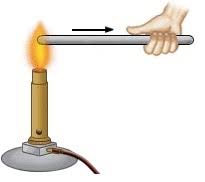 The ability of a substance to allow the flow of heat through its body is called conductivity of heat or thermal conductivity.

Getting Hotter = Getting Bigger: Thermal Expansion

We’ll start with gases. The idea behind thermal expansion is that gases expand as the temperature increases.

The opposite of expansion is contraction. If things expand with the addition of heat, it makes sense that they contract when heat is removed.

If you remove enough heat from a gas it will become a liquid. Liquids can turn into solids with further cooling.

A bimetallic strip consists of two different materials with different expansion coefficients that are bonded together.

For example, for brass and steel

When the strips are at room temperature: There is no expansion or contraction

When the bimetallic strip is heated: Since brass expands more than steel, so it has greater length and hence it comes on the outer side of the curve.

When this bimetallic strip is cooled: Since brass contracts more than the steel, so brass strip becomes shorter in length, and hence it curves with the steel on the outside.