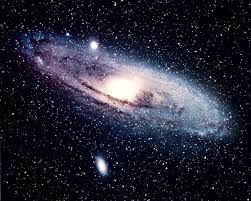 A galaxy is a huge collection of gas, dust, and billions of stars along with their solar systems. They are all held together by gravity.

Spiral galaxies are spiral-shaped. They have curved arms which makes it look like a pinwheel.

The central bulge is made of older stars.

The dense molecular clouds of hydrogen gas and dust in the spiral arms of spiral galaxies are the areas of intense star formation.

Our Milky Way Galaxy is a spiral galaxy and is about 120,000 light-years in diameter containing upto 400 billion stars and possibly just as many planets.

Our Solar System is located within the disk of the Milky Way Galaxy, around 27,000 light-years from the Center of the galaxy.

Elliptical galaxies are a mass of stars bunched together in the shape of an elliptical disk. These galaxies are smooth and oval shaped.

Spiral galaxies are believed to be younger than elliptical galaxies, They contain little gas and dust, so therefore form very few new stars.

They have more stars near its center and fewer stars in its outer regions.

Small elliptical galaxies are the most common kind of galaxy in the universe.

These galaxies aren’t spirals or ovals. They have irregular shapes.

Many of them have no obvious center point.
Some of them appear to be the result of a crash between several galaxies.