Batting for Beetles by Imanmeher Sharma

Most of us think that bugs are creepy, weird and gross. Well, I’m here to tell you that you thought wrong! Bugs aren’t gross! They can be really cool, if you take a little peek into the world of what bugs can do. Here are somereally fun facts about some of my favourite bugs!

The Bombardier beetle or as its scientific name calls it, Brachinus crepitans, will shoot boiling acid out of its rear end when threatened! This acid may not be lethal externally, (if you think horrible blistering is not lethal!) but if accidentally ingested, it can lead to some serious problems! To make this sound a little less alarming, you can say that it gives out a liquid death fart when threatened.

The Jewel Beetle, or Chrysochroa toulgoeti are beautiful little beetles known for, yup! You guessed it! Their ability to look like little jewels. However, this makes them targets for hunters. Their wing cases, or elytra are used to make jewellery, accessories and decorations, particularly in Asia, India, Thailand and Japan because they are so shiny! In Britain there is a very famous dress in Smallhythe Place in Kent that is covered in the elytra of a thousand sparkling jewel beetles! 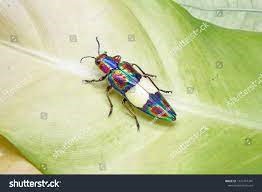 The Rhinoceros Beetle, or Chalcosoma caucasus, Despite its ferocious looks and HUGE size, these horned, clumsy little (or huge) beetles are harmless. They eat tree sap and overipe fruit, and LOVE bananas! Only the males have the horns; the females have spade-like protusions to dig in leaf-mulch to make a nest. 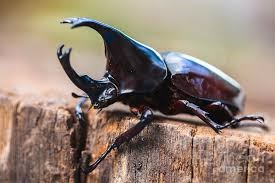